Get Directions to the Shrine
© 2022 Mother Cabrini Shrine, Golden Colorado. All right reserved.

Mother Cabrini loved the mountains of Colorado. The foothills west of Denver held a special attraction for her. During her journeys in 1902 to visit the Italian workers and their families in the Clear Creek, Argentine, and South Park mining districts, Frances X. Cabrini discovered a property on the east slope of Lookout Mountain owned by the town of Golden.

No reliable source of water was known to exist on the property at that time, although there were two fine barns and a springhouse built in the 1890s. In 1909–1910, she negotiated the purchase of this property as a summer camp for her charges at the Queen of Heaven Orphanage in Denver, CO.

A farming operation, with poultry, other livestock and dairy cows, was established and maintained by three of the Sisters of the Sacred Heart who set up living quarters in the loft of the larger barn. During the summer months, groups of about twenty girls, according to age, would spend several weeks at the summer camp. They enjoyed the freedom of the outdoors and recreational activities in addition to tending the animals and performing farm chores.

The only water was in a small pond next to the spring house. All of the water needed for drinking and cooking had to be brought up to the summer camp from the stream at the bottom of Mt. Vernon Canyon. In September 1912, the sisters complained to Mother Cabrini that they were dying of thirst and there was no water to be had. She answered, “Lift that rock over there and start to dig. You will find water fresh enough to drink and clean enough to wash.” The spring, which is housed in an 8,000 gallon tank, has never stopped running. Many pilgrims, through their faith, believe the water has brought healing and peace to their lives. 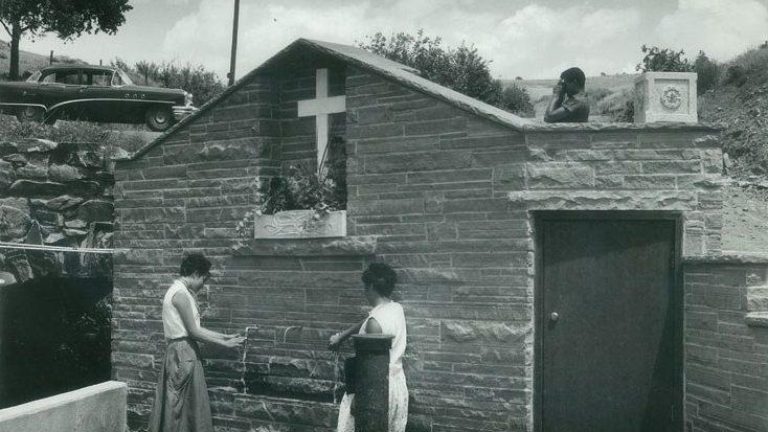 A replica of the grotto of Lourdes, France, was built over this spring in 1929 and was demolished and replaced in 1959 by the present one, built of sandstone. Here, in the quiet atmosphere of candlelight before the Mother Cabrini altar, many come to pray and ask her intercession with the Sacred Heart and His Holy Mother. The people present their many requests and, through faith, say their prayers are answered. 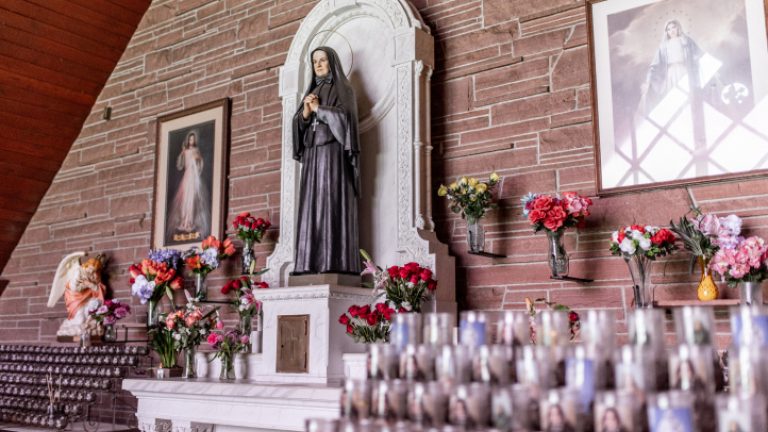 Our mission at Mother Cabrini Shrine is to provide a unique and peaceful environment for visitors to experience God’s loving presence through quiet meditation and prayer. 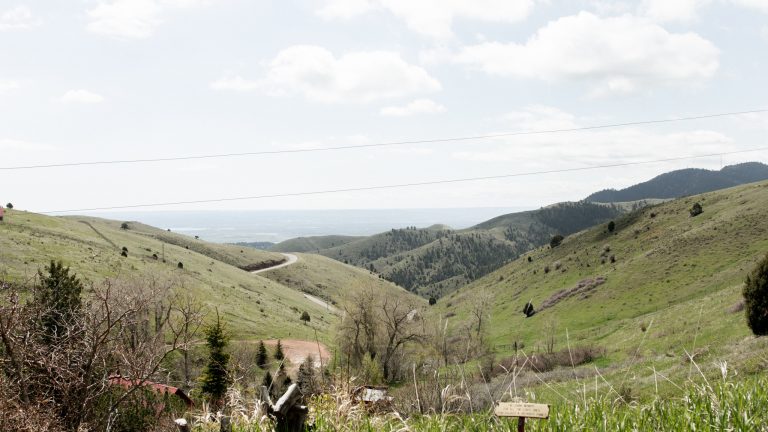 Want to see for yourself?

It was during Mother Cabrini’s last visit to the foothills in 1912 that she and a builder, Thomas Eckrom, drew up the plans for the Stone House that would serve as a dormitory for the girls. The house was to be built of native rock. She called the sisters who were with her and said, “daughters, I dropped my cane… go back and find it. Where you find it make a sign with stones because that is where the house is to be built.” The cane was on a level spot overlooking the city of Denver.

Each evening the girls would load a cart, drawn by a donkey, with stones from a nearby quarry for the next day’s building activity. The construction of the Stone House commenced in the fall of 1912 and was finally completed in 1914. The house was used as a summer camp for the girls from the Queen of Heaven orphanage.

The ground floor of the Stone House has the chapel, sleeping quarters for the supervising Sisters, a living room, an entry area with main staircase, a back staircase, and several small utility areas which remain basically unchanged. The second and third floors were open dormitory areas. Upon the closing of the Queen of Heaven Orphanage in 1967, the summer camp became a year around retreat facility, and a place for small prayer gatherings.

Today, the Stone House is listed on the National Register of Historic Places. The Colorado Historical Society has granted over $138,000 to restore and renovate the Stone House. Extensive work has been done to the roof, windows, electrical system and wood work. 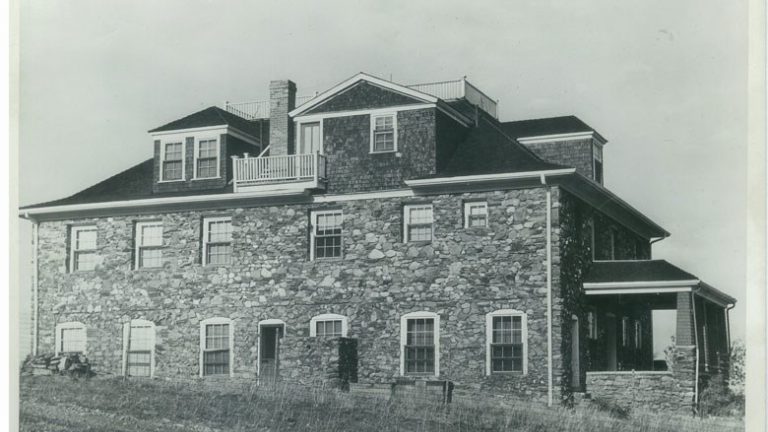 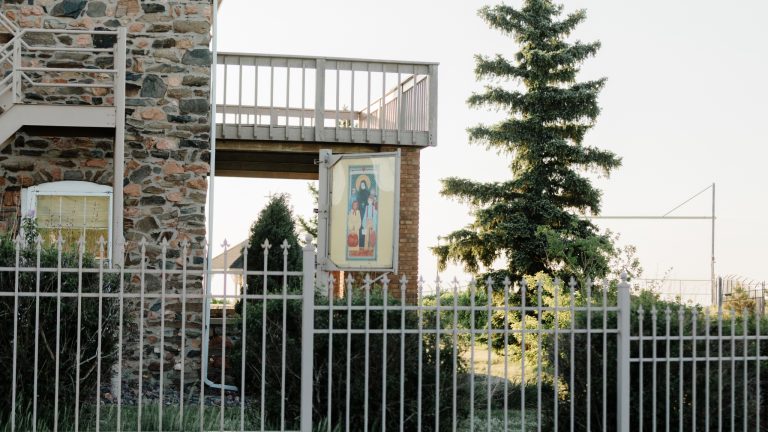 On her last visit to Colorado in 1912, Mother Cabrini took several sisters and a few of the children from the orphanage by horse and buggy along a cow path to the foot of the highest hill. Leaving the buggy at the base, they climbed to the top where they gathered white stones and arranged them on the mountain in the shape of a Heart surmounted by a cross; with the smaller stones, she formed a crown of thorns on the highest promontory, overlooking the city of Denver. Frances X. Cabrini dedicated the hill to the Sacred Heart of Jesus, naming it the “Mount of the Sacred Heart”. Those stones are still present there beneath a glass case and preserved for all to see. 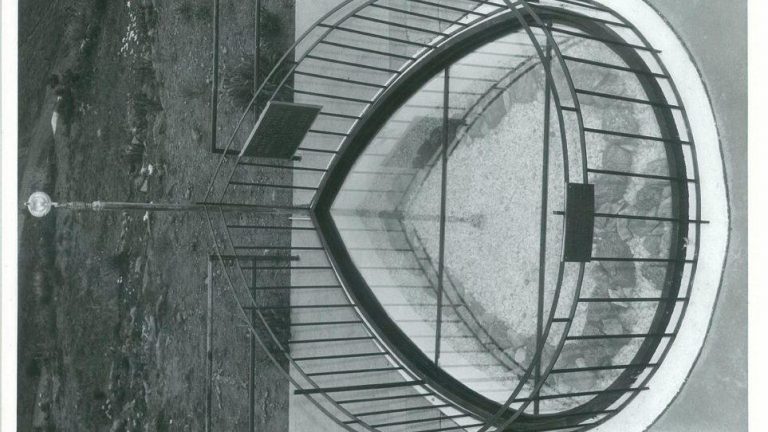 In 1954, a twenty-two foot statue of the Sacred Heart of Jesus, carved by an Italian artist was mounted on an eleven foot base and erected above the Heart of Stones. Beginning September 11, 1954, 373 steps leading up to the top of the Mount of the Sacred Heart were placed and completed in just 67 days.

The stairway follows the path Mother Cabrini, the sisters and the children took to the top of the mountain. This stairway following the Saint’s footsteps is also symbolic of the pathway Christ took on His sorrowful way to His crucifixion and death, through the Stations of the Cross. Each station is made of stone mosaics made in Italy and depicts the suffering of our divine Lord as He gave His life for our salvation.

Mary, through the mysteries of the rosary, invites the faithful to continue the journey begun with the Stations of the Cross reminding us through recitation and meditation on important events in the life of her Son, each mystery brings us closer to the Heart of Christ. In 1955, the Knights of Columbus placed terra cotta benches along the stairway, thus allowing pilgrims to rest, pray and meditate. At the entrance to the stairway is a large crucifix. 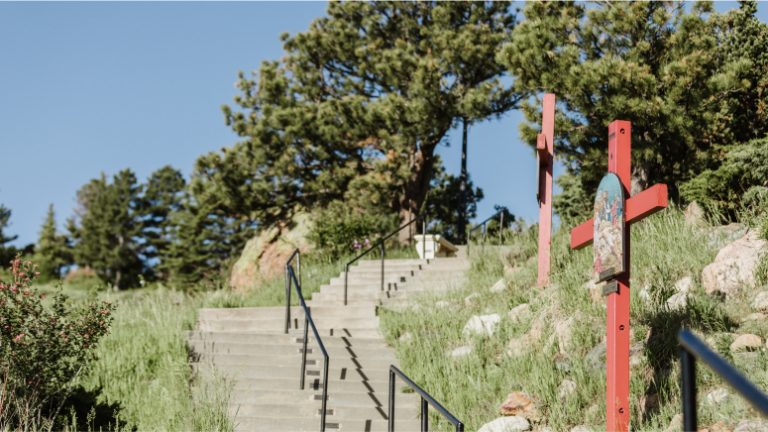 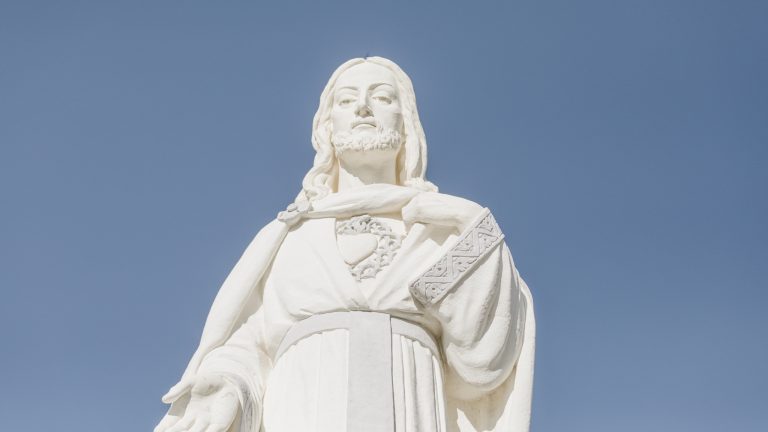 Walk the grounds yourself.

The Missionary Sisters of the Sacred Heart moved to the Stone House and resided there until the convent was completed in June of 1970. This three-story structure is built of Williamsburg brick. It contains a chapel dedicated to the Sacred Heart, meeting rooms, a gift shop with an exhibit of artifacts and clothing used by Mother Cabrini, housing for the resident Sisters, and overnight accommodations for visitors. 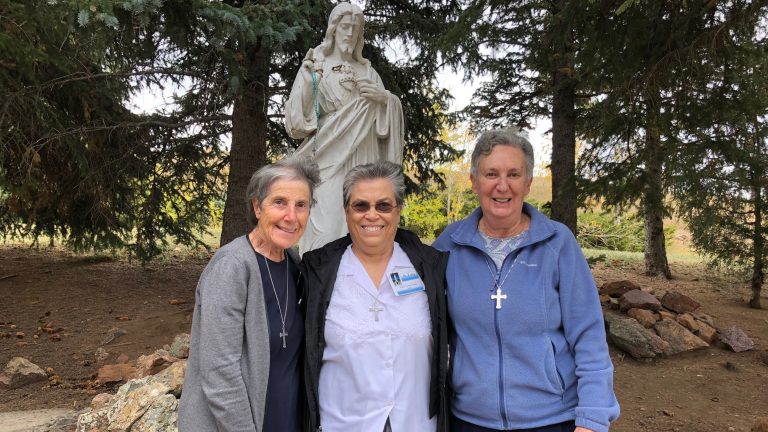 The beautiful stained-glass windows just off the main chapel, depict Mother Cabrini’s life, her birth, her confirmation, her missionary vocation, the founding of the Missionary Sisters of the Sacred Heart of Jesus, her meeting with Pope Leo the XIII, her devotion to the Sacred Heart of Jesus, the voyage to America, working with Italian immigrants, crossing the Andes, Mother Cabrini’s death, her miraculous cure of infant Peter Smith, and her canonization to sainthood. The windows originally came from Villa Cabrini in Burbank, California, which was a school formerly sponsored by the Missionary Sisters.

Today’s Shrine embodies the fulfillment of Cabrini’s foresight when she wrote, “I can envision many small chapels here where many pilgrims will come to pray.” 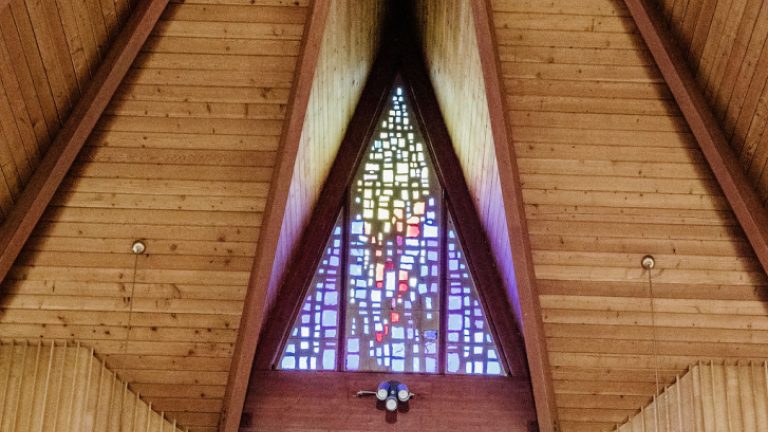 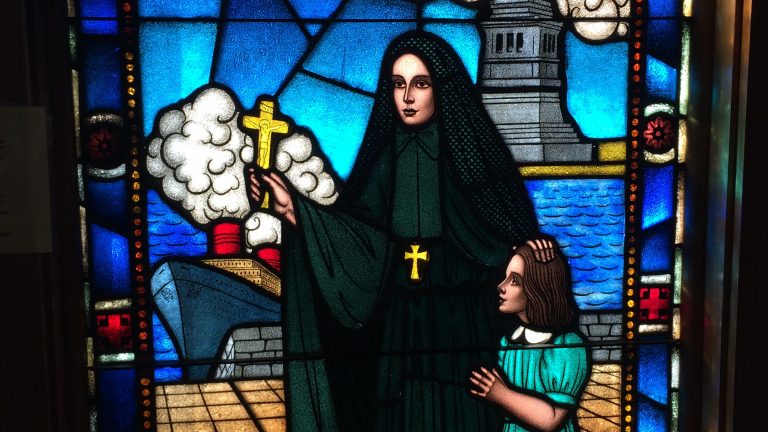